The other day I touched base with an architect colleague who shares my passion for sustainable design. We lamented the fact that despite the growing certainty about the very real consequences of climate change and environmental degradation, green building hasn’t taken off as we’d hoped it would in this country. As one example of this: back in December 2013, when I took my Passive House training, there were about 40 projects built or in planning in Canada. A quick online search of the PH database reveals that now, two years later, there are only 15 built Passive Houses in Canada, (while 371 have been built in the U.S.) – disappointing numbers, to be sure, and indicative of a movement that’s lost its momentum.

It’s a well-known fact that PH and other green building strategies are a “hard sell” to ­most homeowners. Articles and blog posts about the subject often cite two barriers: the additional building costs (up to 10% over conventional construction for PH), and the current low cost of energy throughout much of North America (which makes for decades-long payback periods). These two issues are exacerbated by the lack of support for green building on the part of both industry and government, who are slow to adopt and promote new building standards. Our governments have cancelled popular energy retrofit programs, and maintain a laissez-faire attitude to housing by allowing the real estate market to dictate outcomes.

The results: ridiculously inflated prices, unnecessary tear-downs, and the loss of social sustainability. In Vancouver, for example, we’re witnessing the wholesale destruction of good post-war housing. Last year alone, over 1000 demolition permits were issued, with an average of 70 houses per month being torn down and consigned to landfills. Meanwhile, city buyers, confronted with exorbitant land values, feel compelled to maximize the size of the houses that they build on these lots. Resale value is prioritized, but real estate listings and evaluations generally don’t recognize the value of things that make a house more sustainable: low energy use, small footprint, durability, and so on. Homeowners perceive the false need to keep buying up into newer, “better” neighbourhoods. This in turn pushes up sale prices and defeats attempts to establish a lasting neighbourhood culture.

There’s an inherent flaw in the concept of house-as-investment (read: cash cow). It arises from the notion that we should always be “better off” materially than our parents, whether that means bigger houses, more stuff, more vacations, or a retirement characterized by undiminished wealth and mobility. I believe this last notion is what’s driving the corporate agenda for more and more profit, the number one thing that is ravaging the planet. Corporations are (often correctly) perceived as the bad guys, but let’s remember that it’s ultimately the shareholders who demand greater dividends to maximize their retirement savings.

This ethic remains unchallenged in the current election campaign by any of the major political parties, who are busy pitching directly to the middle class. We’re encouraged to expect more and more individual prosperity, promised it in fact – and this is the metric by which we’re expected to measure a government’s success. I call that lazy and short-sighted. It’s offering people what they want to hear, instead of holding out a bigger vision for the future. 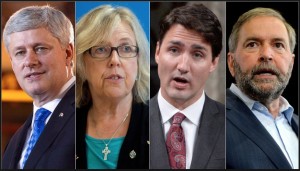 In the past ten years of blatant political pandering to our basest desires, we’ve lost ground in our efforts to create a more sustainable culture in Canada. The loss of interest in green building is just one aspect of this. Now there’s an opportunity to refresh that dialogue and to demand leadership for change. As we cast our votes in this election, let’s stay focused on a bigger vision in which all of us can enjoy real and lasting abundance.

John Gower Design has provided me with outstanding service, time after time. I have relied on his team’s ability to recognize the scope of work that I have required, and deliver exactly the level of service which I had asked for. John Gower Design has shown a high degree of experience on my projects that required design solutions. Many of the designs had high levels of difficulty and I was always impressed with the intuitive knowledge that I could tap into. A pleasure to work with!

We looked at many house plans over the past few years looking for the one that would fit the property, fit ourselves and had creative style as well. To be frank, your whole line of plans was appealing and our second choice for a house plan was also one in your catalog. Thank you very much for your care, your time and your input.

We spent the night here last night and we absolutely LOVE our place.  It is just gorgeous!  Every square inch of it is well thought out, beautiful, all the views; from lying in bed, from working, from cooking, all the window views, everything is just gorgeous. Thank you so much for your work.  Thanks for your help with colour choices;  it looks great!  You’ve done a fantastic job, I hope this piece is the highlight of your portfolio, or one of the highlights and brings you lots of work.  Its a …

Everyone loves our plans and I have referred you to a number of people who are planning to build.

Ron and I are very happy with the design of the house…. We love the house and feel good inside the spaces. I know when we move in, it will fit us perfectly.

I can only say that I was very content. John is a very professional fellow.

Miro M.Bowser, BC
View all testimonials

Thank you John, for working with us on this home design.  You are so nice to work with, we truly felt important and valued…You helped us solidify our vision into a beautiful home.