BUSINESS PROFILE – Building With The Web

The awesome potential of the Internet to help small businesses widen their market and increase sales is being tested by local architectural designer John Gower.

The 41-year-old has launched a website to sell his home plans and ultimately promote Nelson as a hub of self-employed professionals using electronic commerce to tide them over during traditionally lean winter months.

“I think everybody self-employed in Nelson complains about the same thing, January and February are quiet times, its pretty cyclical and you don’t have any fall-back to tide you over,” Gower said. But so far this month his website, www.bcmountainhomes.com has had almost 300 visits.

“There are a lot of people in this area who are very educated, skilled and creative but there’s not a large enough local economy to buy their services. The Internet, as it evolves and matures, will present an opportunity for a leveling so rural areas can participate more in the wealth generation that’s occurring in cities. It’s by-passing us now because there’s not the traditional conduits to bring money into the area. So the Internet has the potential to be very empowering.”

Gower was born and raised in Vernon, B.C., and arrived in Nelson in 1981. He left to study architectural design at Carleton University in Ottawa then did a masters degree in geography at the University of British Columbia. He returned to Nelson in 1989.

“When I came back I thought I would be doing geography related work, but I also had quite a few years of architectural experience. My first job here after I returned was a three-month contract to produce an economic development strategy for the Slocan Valley,” Gower said.

In 1990 he met fellow Nelson-based designer David Dobie. “Early in 1990 I had a prospective design client up the valley and went to David’s office for some blue prints,” Gower said.”I had admired his work for a long time and he liked what I was doing so we started collaborating.” The pair were inspired by the rich variety of architectural styles in Nelson.

“It just got busier and busier and the practice grew year after year. Between us some years we did as many as 70 projects. About 80 per cent of the work was on houses, new and renovations,” he said.

The business relationship ended in 1998 when Gower went to Mexico for four months, though the pair still work together on some projects. 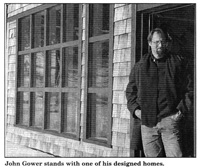 Gower’s dream of using the Internet to sell copyrighted home designs began in 1996 after a visit from local Internet service provider, The Net Idea.

“I had been thinking of doing a catalogue of house plans, and selling those in book form,” he said. “I thought, there’s lots of opportunity here to market primarily small house designs for challenging lots, the sort of thing you come up against in this area and for which there wasn’t a lot of product out there.
“I thought, “Wow, it could be an on-line catalogue!””

Gower learned how to program a computer and design a web page and 1500 hours later produced the site. He has 12 house plans on the website, for sale at between $230 to $850, depending on square footage, plus photos of Gower-designed homes, business information, a plan book and links to similar sites. The home page has a photo of Nelson in summer and, naturally, an order form. Gower said the next challenge for small business Internet users was finding a cheap option to take credit card payments. The B.C. Mountain Homes site presently takes payment only by cheque or money-order.

“This is something that’s a challenge for any small business person doing work on the net, to get a merchant Internet account with a regular bank can cost as much as $10,000 for a security deposit,” he said. “There are some people that will provide that service for you, but it is very expensive.”

He hopes Nelson businesses using e-commerce might be able to join together and somehow reduce the cost of taking credit card payments. Consumer shopping online was worth $28.5 billion[sic] in Canada in 1998.

“Hopefully I can sell a plan many times over to recoup costs. You don’t make them so expensive that it’s cheaper for someone to steal your idea and have a draftsperson draw it up,” Gower said.

“There is a lot more than just designing the site, putting it out there and hoping people come. Getting people to come to you is half the fight and this year I’ll be trying to get onto as many Internet search engines as possible.”

“I’m promoting a product that I think is really timely, I like the idea of building smaller, more interesting and functional houses, it’s the way of the future,” Gower said.

“I think the standard house product out there is pretty big and uses a great deal of energy, it’s hard to clean, hard to furnish. As a whole you have to get away from that, which more and more people are realizing.

“As the baby boomers age their kids leave and suddenly they need less space. And those beyond the baby boomers may realize they are not quite as affluent as the generation before. We are down-scaling our needs a bit and I think a small house is an excellent response. Also,if you build less square feet then potentially you have money left over to create beautiful finishes.”

Gower also uses the website to market his contract design service that ranges from 3 to 7 percent of the cost of the project.

“By building smaller, if you do it right, you can still have all the living spaces for the different functions,” he said.

“Light is crucial, connection with the outdoors is important and you need lots of storage!”

John designed our lovely home in 2002. We opted for the full package (highly recommended), including interior design and ongoing support throughout the construction process. We can’t say enough about how pleased we are with our home. Every square foot serves a purpose with a harmonious integration into the landscape. John spent much time with us discussing how we spend our time in our home, taking the concept of custom home to a much higher level. We have referred two of our friends to John–ther… END_OF_DOCUMENT_TOKEN_TO_BE_REPLACED

Your building plans worked fine for us and there were no issues of any size… We moved in here in Dec.2013 and find the house well laid out and easy to live in. Our dealings with your company were straight forward and presented no problems. All in all a good choice for us.

HelmutChilliwack, BC
View all testimonials

John Gower provided the designs for a renovation to our 70 year old house. He designed a home that is energy efficient, durable, safe and beautiful. We cherish its simplicity, the connection it allows us to maintain with our community and the heritage feel that we were able to preserve. He made the process fun, thoughtful and productive. The sustainability of the design work that he provided will allow the house to be enjoyed for many more years.

Suzanne W.Comox, BC
View all testimonials

John has a unique ability to combine intricate elements of aesthetics, functional layout, resilience, and purpose into a progressive design package with minimal environmental impact both in construction and ongoing habitation. His designs are both mindful of the future and accommodating to his customers’ desires and lifestyle requirements. Such a complicated balance of considerations is not easy to achieve and John seems to do it time and time again. We have worked with John on several projects … END_OF_DOCUMENT_TOKEN_TO_BE_REPLACED

The drawings have exceeded our expectation.  We are very appreciative of the expertise, the professionalism and look forward to building a beautiful well designed Mountain Cabin. Thank You!

John was our house designer for a property on a steep site on the water. We wanted something modern and a bit unusual and he provided that. He was respectful of our needs and our wishes and designed a lovely and functional home. Working with him was a pleasure. He made several site visits and as well we met with him several times at his office. As well he took part in sourcing material that was hard to find. I would recommend him to anyone. We had no problems re deadlines or budget. The house wa… END_OF_DOCUMENT_TOKEN_TO_BE_REPLACED

We hired John Gower Design to design an energy efficient Arts & Crafts style home for us. Working with John was an enjoyable and productive experience. He took our ideas and made them a reality. We found John’s strengths to be his sense of space and proportion and his willingness to listen to our ideas. We have lived in the house for two years and are continually amazed at how well the house works and its comfort and beauty.

Ross N.Victoria, BC
View all testimonials

The house has become such a place of healing and retreat for us, we love every bit of it… Everything about the function of the house is working just as we had hoped- the indoor and the outdoor spaces seem to easily accommodate the extra people and we lived on the covered part of the patio all summer… I am so grateful for your creative genius in bringing our partly formed hopes and dreams into such a beautiful reality.

Linda F.Courtenay, BC
View all testimonials

It’s a beautiful home… We’ve had lots of comments and a few visitors coming to check it out and the feedback has been very positive – everyone loves it!